Where Are The Jobs?

The SelectLeaders/Cornell Job Barometer 4th Quarter Update – “An Assessment of the Job Market in Commercial Real Estate” – comes amidst headlines that the U.S. is 8 million jobs short of the pre-recession peak. Some reports indicate that it could be 7 to 9 years before employment returns to 2007 levels, if ever.

However, amidst all the negative news in commercial real estate, value declines finally bottomed out in the 2nd Quarter of 2010, after 40-45% drop from their peak in 2007 (Source: Green Street Advisors). Although distress levels remain elevated, there are signs that the market may be on the mend. 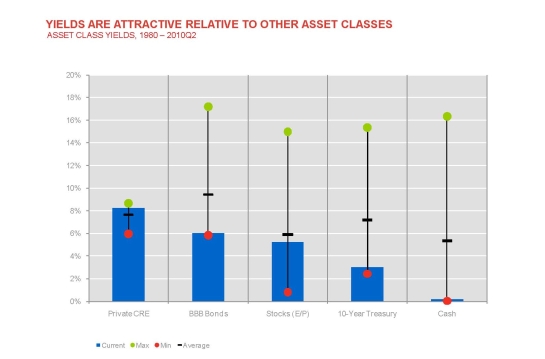 With Commercial Real Estate yields looking comparatively more attractive than other asset classes, employers are taking a hard-line approach to managing costs more efficiently while providing better service at the property level. In 2010 (Figure 2), jobs in accounting/control and property management showed the strongest presence. These postings reflect the fact that managing and keeping tenants is an essential part of maintaining the integrity of a portfolio during challenging economic times.

Since 2007, the Multi-Family sector dominated the job market, but has nearly fallen off the charts by September 2009. Not unexpectedly, Banking, responding to the economic stimulus, overtook Multi-Family for the highest number of jobs of any sector from September, 2009 to September, 2010.

What kind of compensation can be expected from these postings? According to CEL and Associates, commercial real estate salaries for new hires have taken a nosedive in 2010 (Figure 4). This is a reflection of the stiff competition for new jobs and the largest qualified applicant pool in recent memory. Because so many skilled professionals are desperately searching for work, they are willing to work for less, and companies are taking advantage of this.

Source: CEL and Associates (2008 not included due to lack of data)

So where are these jobs located? According to our data; California, New York and Texas account for 38% of all new jobs posted in 2010. Florida, Illinois and Massachusetts make up another 15% (Figure 5). Since 2008, California, New York and Texas have consistently been the top three markets for new CRE job postings. New York and California make sense because many commercial real estate companies and financial institutions are headquartered in these areas. On the other hand, Texas has enjoyed relative tranquility in the storm of commercial real estate job losses while other markets have been decimated, due to its relatively low barriers to entry.

Finally, and perhaps most important for those searching for a job, “We are seeing activity on the recruiting front,” said Tony LoPinto, founder of SelectLeaders. “Search activity is starting to happen across the board… real estate investors, wannabe funds, operators, and corporate users are all back in the hunt for talent,” he said. Executive Search C-Suite and senior executive hiring historically portends hiring of teams and ultimately throughout the corporation.

Yet the single factor that could most greatly impact our industry for years to come is the loss of entry-level jobs. By the 3rd Quarter of 2009, unemployment was 20% higher for job seekers 24 and under, compared to those over age 25.

According to the data, the greatest number of professional level commercial real estate job postings on major job boards in the U.S. this year was 385 in March (source SelectLeaders/Cornell). Is it possible that there were only 385 jobs posted in one month at the peak of this year? The short answer is no. We know there are more jobs out there, but because so many employers are inundated with resumes, they are hesitant to post quality jobs on major job boards like Monster and Career Builder. Therefore, job seekers should look to specialty commercial real estate job boards like SelectLeaders, The Ladders, ICSC and eFinancial where a higher percentage of “quality” jobs are posted. Additionally, a job seeker should upload their resume and make it searchable on Job Boards, because many employers search resume databases on the Job Boards rather than postings; again because of the deluge of resumes.

The good news is that we are finally seeing moderate increases in commercial real estate job postings, as well as reports from SelectLeaders that large posting packages have been purchased for 2011, that were not purchased in 2010. The 4th Quarter of 2010 shows positive signs that better days in commercial Real Estate are sure to come.